The human body, a natural system, can not live with an unnatural diet and lifestyle.  You can not fool or cheat nature.  Taking a pill to counter and/or cure anything while eating what ever you like will not work.  These unnatural habits have a negative impact on the health of individuals and live blood analysis provides that glimpse into the internal environment of the body providing valuable information about a great number of imbalances and health concerns.  It also shows how lifestyle can impact health and once treatment has begun, retesting will monitor progress and the effectiveness of the regimen.  As everything is seen on a large screen, clients are motivated to follow the program wholeheartedly so that they can see the improvement in their blood.

Following are examples of what is found in blood analysis and a few of the possible anomalies.

Normal Red Blood Cells & One Normal White Blood Cell
Red blood cells (RBCs) comprise the greatest majority of the formed elements in the blood.  The average life span is approximately 110-120 days.  The RBCs are responsible for the transport of oxygen into and carbon dioxide out of the body through ionic bonding with haemoglobin.  RBCs have a consistent, round shape without too much variation in size.  The cells do not clump or stick together.  The plasma (background) has the right number of white blood cells (1:700) and is relatively free from debris.

The White Blood Cell (WBCs) are much less numerous than RBCs with the normal ratio around 1WBC to 700RBCs and come in various shapes and sizes and are classified according to their appearance.  They are capable of moving on their own and can often be seen moving around the live blood sample, something that is not observed in conventionally stained samples.  This motility is an important factor when assessing the vitality of the immune system. 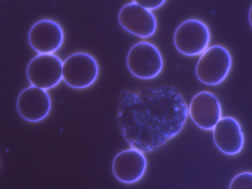 Platelets
The ARROW is pointing to a Thrombocyte (platelet) these are irregularly-shaped cells that do not have nuclei and are much smaller than RBCs.  Under normal conditions thrombocytes are disc shaped, but once activated they change shape and become star shaped structures that enmesh with each other to form a clot. 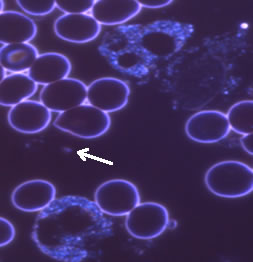 Dried Blood Analysis Overview
Layered Dried Blood Analysis or the Oxidative Stress Test was developed in Europe in the 1920's and has since been used by medical practitioners and naturopaths in many countries across the world. There is a very distinct difference between the layered dried blood sample of a healthy individual and that of a chronically ill patient.

Normal Healthy Blood
This sample shows a uniform red colour, no white open areas and a distinct, interconnected fibrin network.  There are no raised areas, white areas and no variation in colour or density. 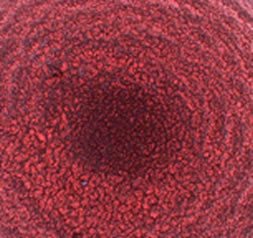 Poikliocytes
The popbottle cap shaped blood cells are a result of free radical damage to the RBC membrane.  It is considered a strong sign of toxicity (tobacco, environmental chemicals, medications, junk food chemicals) and the need for detoxification, increase essential fatty acids and antioxidants and hydration. 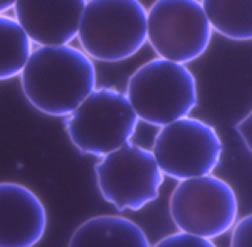 Uric Acid Crystal
These crystals are made from a by-product of protein metabolization  and urea.  These occur as a result of poor protein digestion and accumulation of protein in the blood. 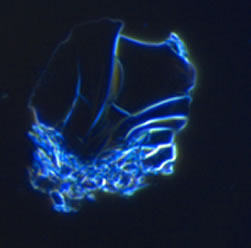 Echinocytes
Are thorny in appearance and indicate kidney stress and dehydration.  As well, it indicates toxicity due to prescription drugs and environmental toxins. 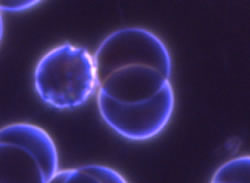 Target Cells
A red blood cell with a circle inside of it or with a pinkish middle is often associated with iron deficiency anemia and may also be an indicator of liver stress. 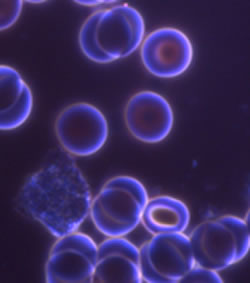 Fibrin
Filament-like sticks that appear in the plasma are related to joint problems and liver stress caused by toxicity.

Rouleau (Chains of Red Blood Cells)
Rouleau is indicative of digestive imbalance and intestinal stress due to enzyme deficiencies or inappropriate diet.  Notice the thrombocyte aggregation and fibrin clusters in the background.  Unfortunately this picture is common and the terrain of this client's system is in need of immediate change. 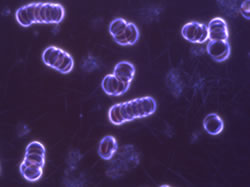 Polymerized Protein Puddles (PPP's)
PPPs are the white areas and look like holes in the sample. PPP's may vary in size, ranging from small white dots to larger "lakes" or "rivers".  They indicated the degree of tissue health and are associated with free radical damage/oxidative stress and toxins.

The shape and size can indicate the nature of the condition.  Round PPPs that are clear on the inside indicate irritations and inflammation whereas large, jagged PPPs with crystals indicate degenerative conditions.

The larger the PPPs and the greater the number, the more serious the condition. 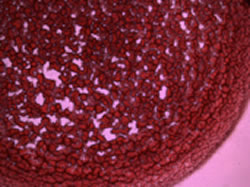 Toxic Bowel Pattern
Large, round, white spaces seen in the centre indicate colon problems.  This is a far too often seen pattern, as our diet has created so much constipation and digestive issues. 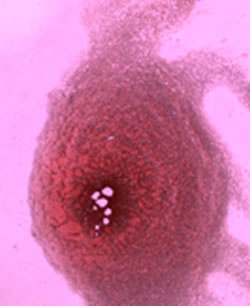 Adrenal Pattern
These very small pinpoint PPPs appearing as a snowstorm imply adrenal fatigue as a result of long-term stress. 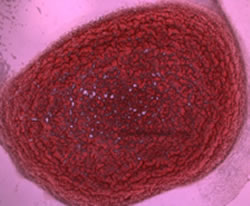 Liver Fluke Infestation
When a black line traverses the white spot, like a drawbridge, it is associated with parasitic infestation of the liver.  Liver flukes are quite common and place a high degree of stress on the liver.  Many symptoms may be caused by liver flukes, including fatigue, headaches, backache, allergy, digestive symptoms and arthritis.

Please call or text to arrange an appointment.